Offering many advantages including individual segment handling inducing savings in lifting equipment, the balanced cantilever erection with launching gantry proved to be best suited to meet the client’s high level of requirement. 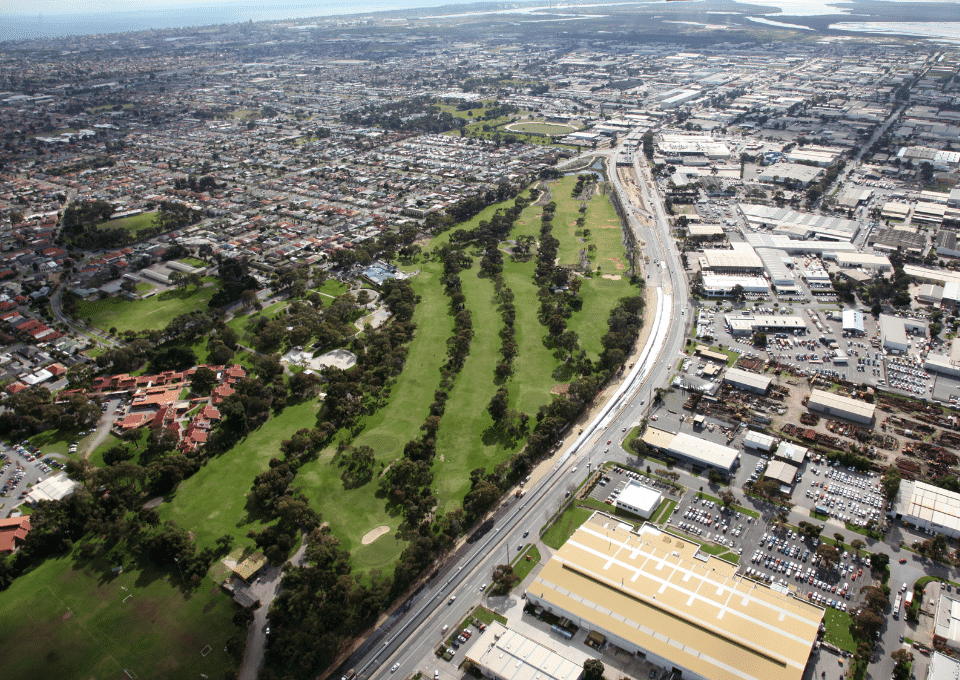 A landmark gateway to metropolitan Adelaïde

The South Road Superway is a 4.8-kilometre non-stop north-south corridor, which needed to be upgraded to improve traffic efficiency, enhance road safety, remove bottlenecks, and reduce congestion in the metropolitan area.

The innovative corridor solution involved the construction of a complex 2.8-kilometre, elevated road bridge providing multiple lanes in each direction above the existing South Road alignment -one of the busiest roads in the region- and crossing major intersections, railway tracks and swales.

The elevated roadway was selected as the most suitable design given the local circumstances.

The viaduct is a precast segmental bridge consisting of a dual carriageway. At the time of construction, the South Road Superway project was the state’s most complex engineering road construction project.
Documentation
2,203
units of precast segments making up the deck
66m
Longest span erected by launching gantry (in metre)
80m
Longest span of the project (in metre), erected with segment lifters
3,300t
Total weight of PT strands installed, stressed and grouted (in tonne)
48,000lm
Linear metres, total length of Freyssibars used on the project (36 mm and 40 mm in diameter)
140m
Length of the launching girder (in metre)
68
Number of piers supporting the bridge
Documentation

Concept design of an elevated roadway followed a series of engineering and environmental investigations with input from operators and landowners on their specific transport and busines needs.

Hence, the balanced cantilever construction with precast segments erected by launching grantry was selected as the preferred method due to the minimal ground impact it involved and the ability to erect spans over 60m, which minimized the number of piers – and raw material quantities-  required for the project.

Additionally, this method allowed to prefabricate the viaduct segments and erect them with minimal disturbance to the traffic and least disruption to local businesses and residents during the entire period of construction. 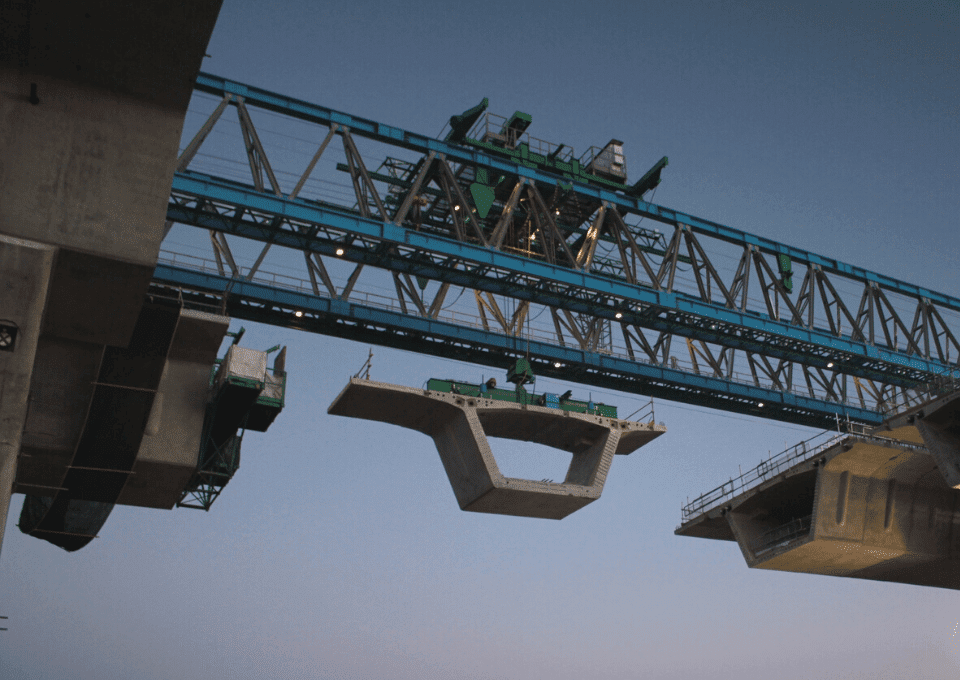 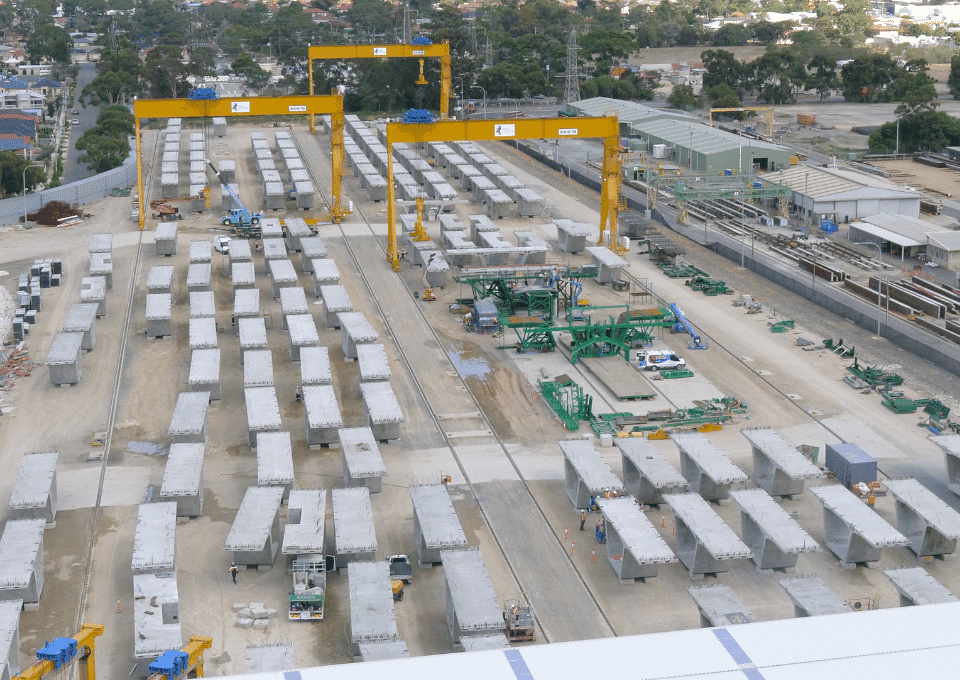 Segments are constructed by match cast in a purpose-built precasting yard next to the work site and transported to the erection location by low bed trailers.

The South Road viaduct was structurally formed by 97 cantilevers and 12 end-spans, made of a total of 2,203 segments. Cantilevers were constructed with the balanced cantilever erection method, namely the span was built by beginning at the pier and proceeding towards the mid-span from both sides of the pier.

With this approach, the precast reinforced concrete segments could be lifted in position using three different methods:

At each pier, the first two pier segments were erected with mobile crane on temporary supports -pier brackets or falseworks specifically designed by our teams to minimize the impact to traffic during erection. Once erected, these shells were cast to the pier, to provide a monolithic connection between substructure and superstructure. This connection and the pier were designed to allow the cantilever erection to proceed with no need for temporary props.

Following segments were erected one by one, using one of the three methods above, lifted in place, epoxied, and stressed to previously erected segment using PT bars.

Cantilever PT tendons would then be installed when required, between pairs of segments. Once all segments of a cantilever had been erected, the lifting equipment was relocated to the next cantilever for another erection cycle. 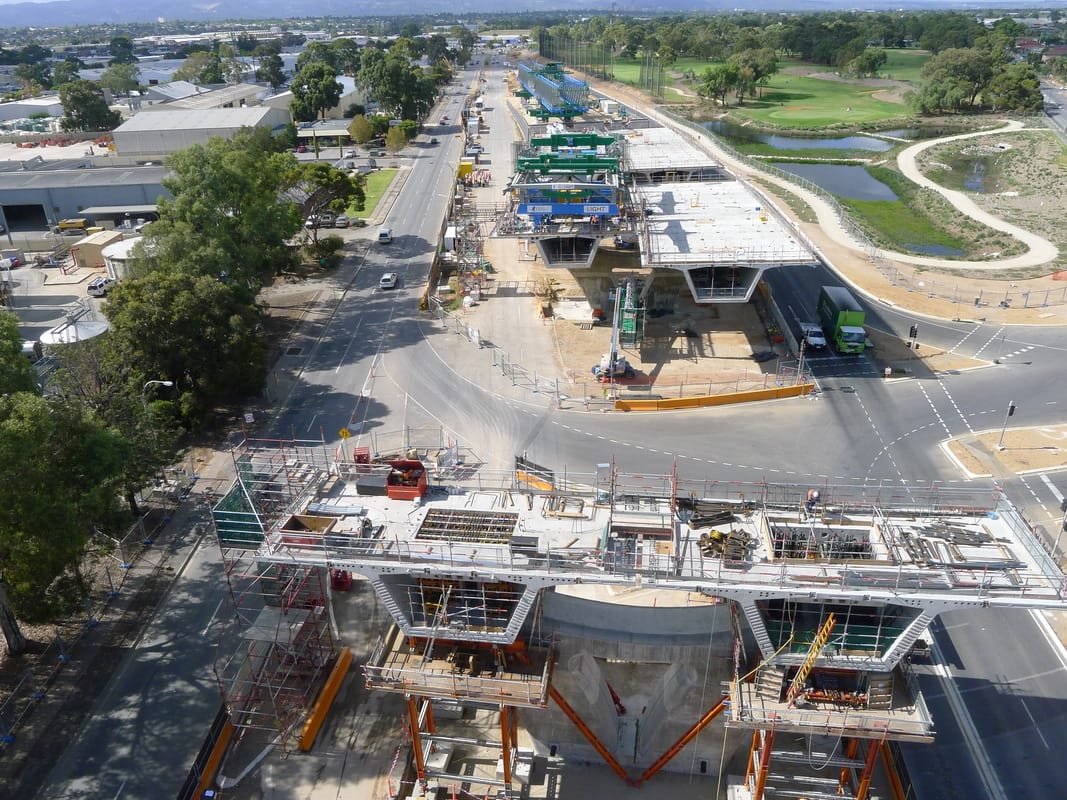 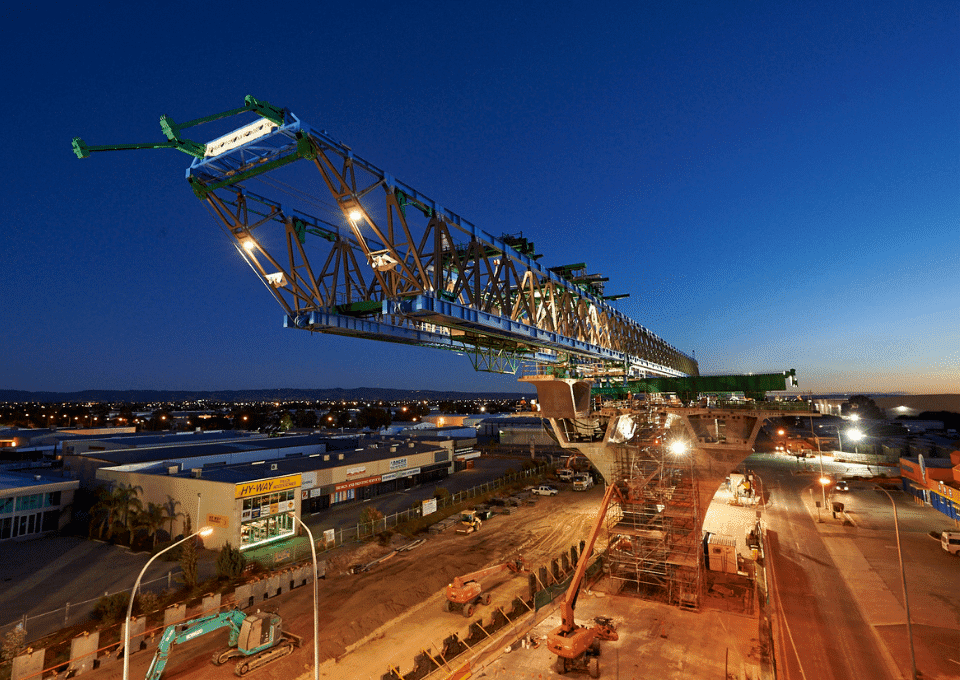 Launching Gantry, one of the largest pieces of machinery

The 140 m-long launching gantry was assembled at the abutment, to operate at anywhere between 7 metres and 20 metres above the existing South Road ground level.

This heavy piece of machinery was used to lift segments weighing between 65 and 90 tonnes each. Once assembled, the launching truss did not require any additional use of cranes.

The launching girder’s design enabled the erection of 2 cantilevers in parallel by means of an extended front and rear support. This provided a great efficiency as it reduced the number of launches required.

Among the many advantages of the launching girder, its ability to be self-propelling made it an ideal solution to build such a long bridge as the Superway project. Among other benefits: 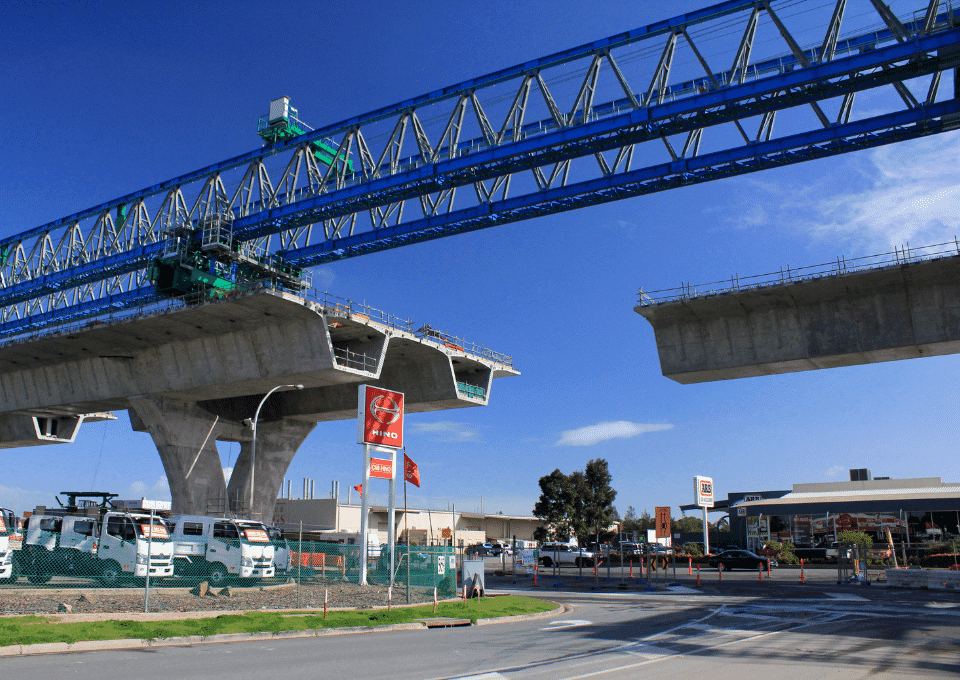 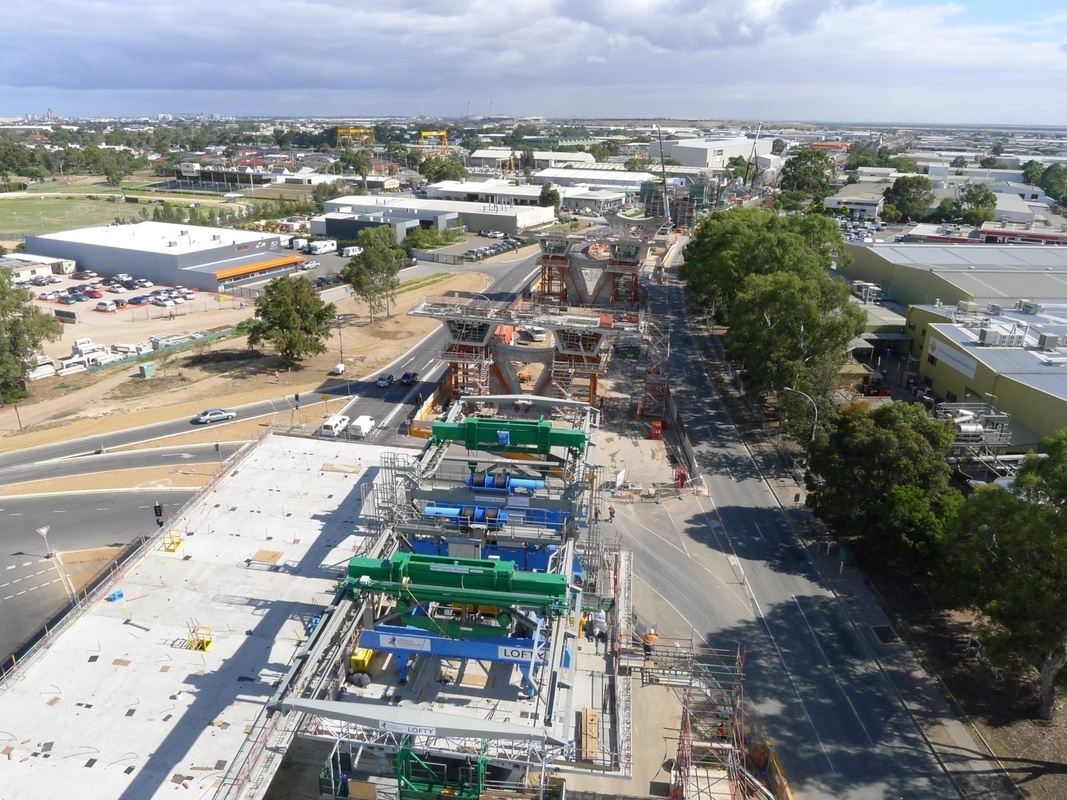 The distinctive features of this project remained in an unusual use of bearings and expansion joints.  No bearings were installed between the substructure and the superstructure, except at the abutments.

The expansion joints were at midspan and employed steel needle beams across the joints to provide continuity for moments and shear, while allowing longitudinal expansion. This was the first application of this type of joint in Australia.

This innovation provided an easier inspection and better maintenance of the bridge since the access to the joints and bearings could be done through the concrete box and no specific access was required. It also reduced the overall maintenance expenses since bearings were smaller in size and cost, which enabled more efficient replaceability.

This solution permitted significant erection cost savings as well since the balanced cantilever erection could proceed with no need for temporary propping or temporary works and the substructure/superstructure connection.

This complex project driven by a challenging urban design was a perfect fit for the balanced cantilever segmental technique. The use of innovative construction techniques such as mid spans expansion joints or special anti-uplift bearings made this project unique in this part of the world

The fully integration of Freyssinet within the overall project team was a good approach to overcome the challenges inherent to such an ambitious project and to deliver to South Australia a major urban infrastructure.