As part of its asset management strategy, the Moroccan National Railways Office launched a programme to restore several engineered structures along the railway line between Tangiers and Sidi Kacem. Structural strengthening of the Hjar Ennhal bridge was a true challenge.
Scroll down
Scroll down

In 2016, the teams at Freyssima (Freyssinet Morocco) submitted the winning bid on an invitation to tender aimed at repairing and execute the structural strengthening of a dozen such railway structures. The largest technical challenge for the teams came in the form of the viaduct at Ahejarr Ennehal, some 11 km south of Tangiers. 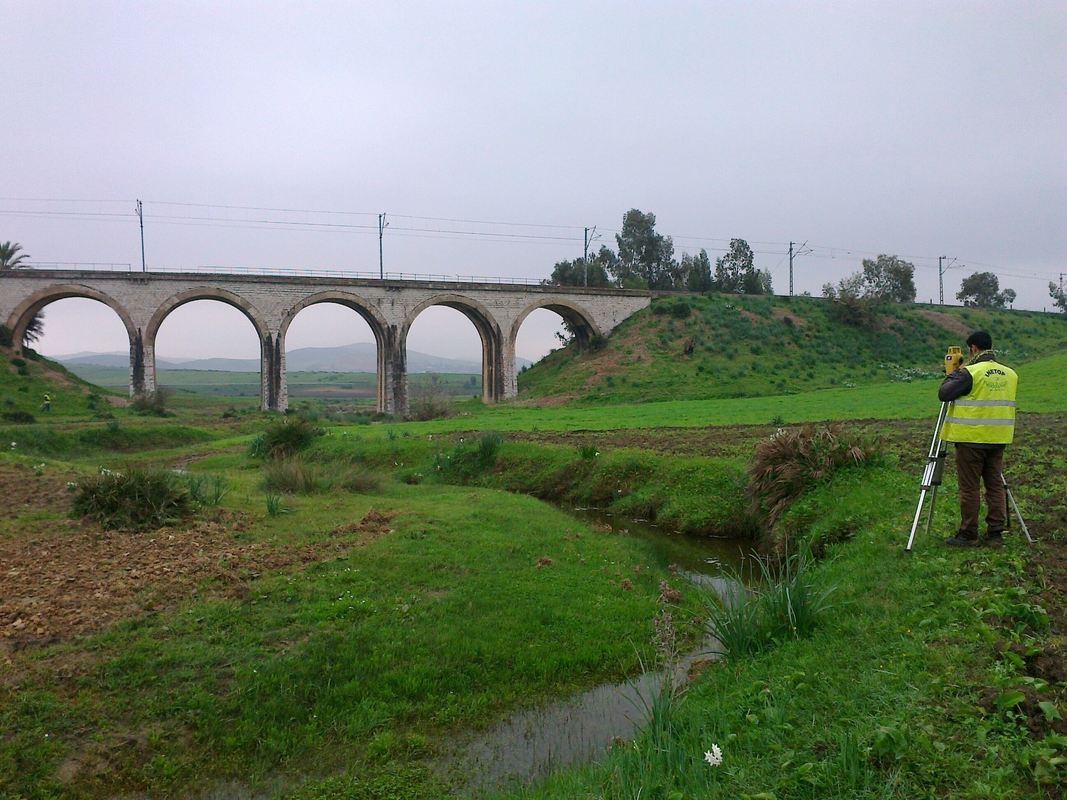 A lightning-fast project without any interruption in traffic

Ahejarr Ennehal viaduct is a combined masonry and concrete structure featuring three 7-metre arch spans, with a total length of 33 metres. ONCF was looking to repair and proceed to the structural strengthening of the viaduct, so that it could be used by locomotives with a 25-ton axle load. Our teams had to carry out the structural repair work without any interruption to railway services, while working to an extremely tight deadline of three months in light of the problems affecting the viaduct. Freyssima’s teams had discovered a number of issues during their painstaking inspection, including local deformation to the facing panels, cracks in the rubble walls and a structural fracture at the junction between the viaduct’s string course and one of the arches.

Emergency repairs for a large fracture

The first course of action was to carry out urgent repairs on the 15 cm open fracture, which was threatening to compromise the viaduct’s structural stability. We advised our client to reduce the speed of the trains when crossing the viaduct while recommending a comprehensive consolidation programme, i.e. installing transverse tie rods on either side of the deck to tighten the structure and prevent the unstable section from breaking loose, and injecting cement grout into the fracture to rebuild and consolidate the masonry core. 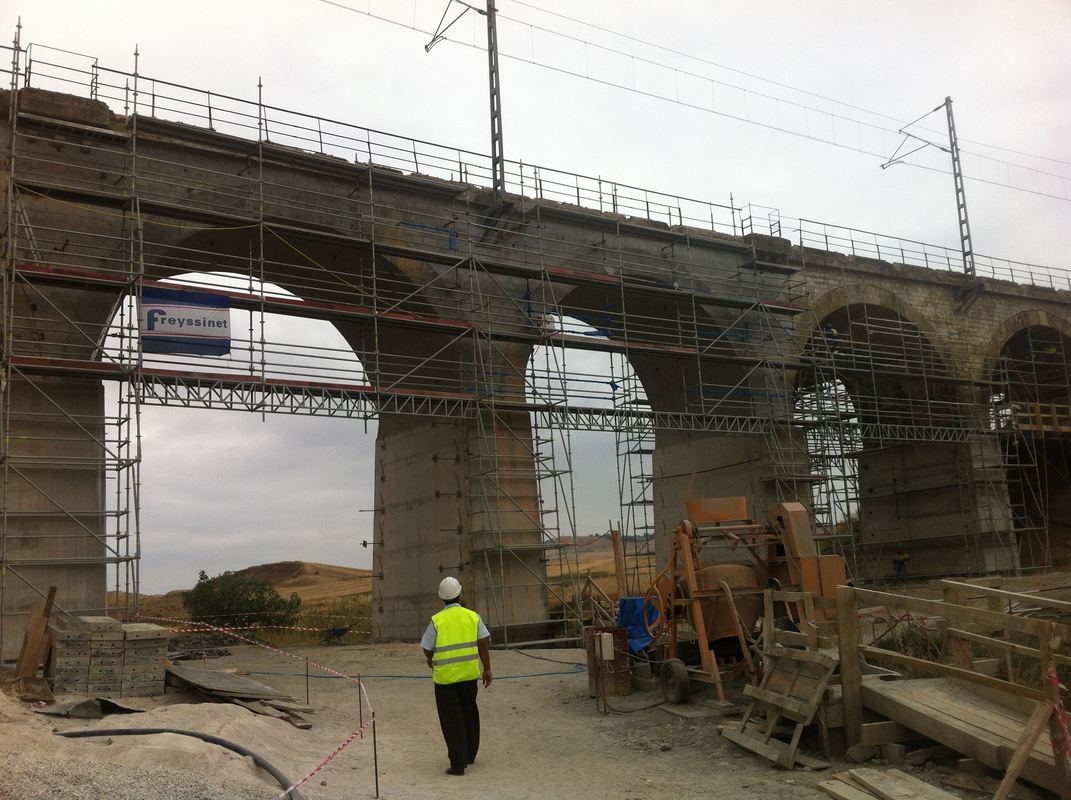 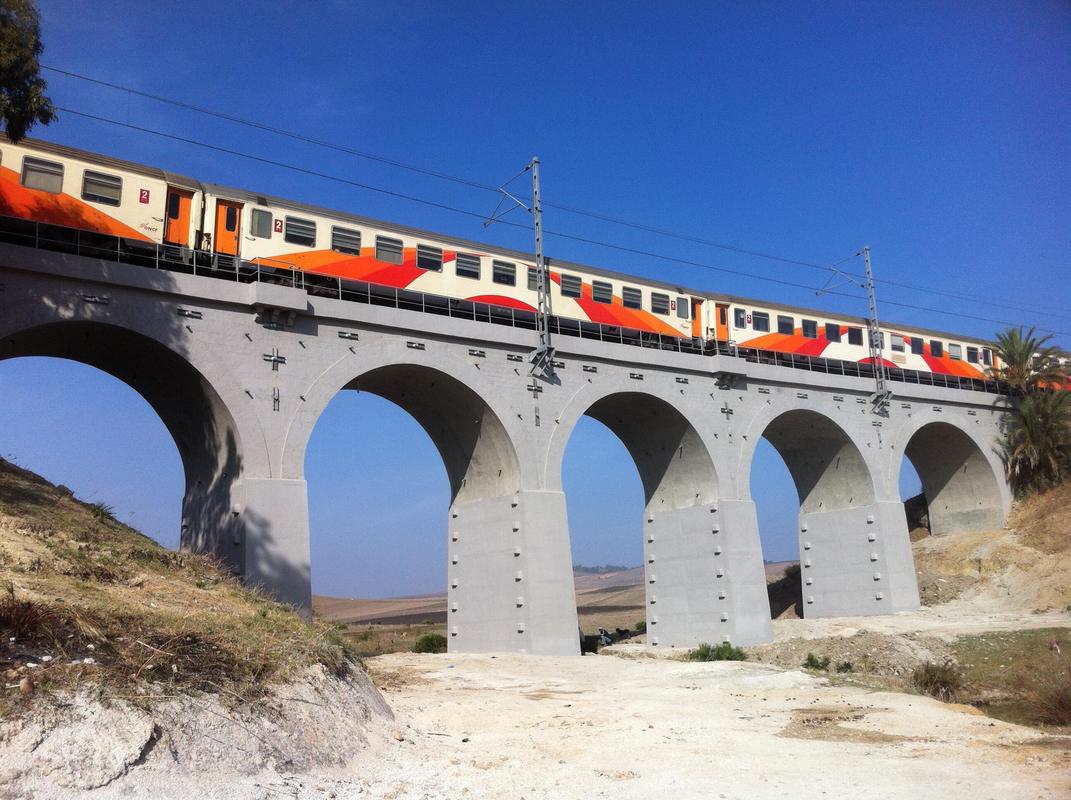 Once the emergency repairs had been carried out, we focused our attention on the structural strengthening of the viaduct. The underside of the three arches has been structurally strengthened by building reinforced shotcrete counter-arches and installing transverse reinforcements. Tie rods were fitted to the spandrels and string course of the arch for the purpose of balancing out the lateral stresses caused by the trains. Finally, the masonry piers were jacketed. The aim was to strengthen the bearings by encircling them with reinforcement mats anchored by prestressing bars (Freyssi500), and subsequently pouring concrete into formwork supporting the pile caps.

We’re especially proud that we managed to carry out all the repairs and reinforcements on the viaduct while keeping to the extremely tight deadline. We actually managed to gain our client’s trust by performing emergency repairs on the fracture that was threatening to compromise the structure’s stability.