Freyssinet was contracted to apply external strengthening to repair shear and bending cracks in the beams of La Canada Bridge on Highway 81 in Tamaulipas State as part of an overhaul of the entire structure by main contractor FAVMA Construccion SA de CV.

A result of multiple reinforcement strategies

The concrete girder bridge was built in the 1970s and had subsequently been reinforced by the addition of external post-tensioning in order to accommodate heavier loads. But lack of maintenance since that time led to the failure of post-tensioning tendons and prompted the need for the repairs.

The original four-span bridge is 140 m long with each 35 m-long span formed of two concrete beams and a slab. Ten years ago it was widened by the addition of a second structure built using AASHTO beams; the strengthening work was only applied to the original structure.

These days, it is common practice to use carbon fibre laminates, or fibre-reinforced fabric applied with epoxy resin to repair or strengthen concrete structures. But this project marked one of the first applications of a high-strength version of Freyssinet’s Foreva TFC, which reduced the number of layers needed and could be applied by ‘dry’ lay up using a single type of resin.

Nothing that the time available for the strengthening work was just a matter of weeks, Freyssinet put forward its Foreva TFC1100 fabric as an alternative to the rigid laminate strips that had been specified. Not only was it quicker to apply, but it required fewer layers of fabric, could be applied ‘dry’, and could accommodate a certain level of roughness on the concrete surface. Laminates would have needed more thorough surface preparation in order to create a smooth surface to eliminate air bubbles and enable an effective bond to be made.

On La Canada Bridge the fabric was applied in up to three layers to the underside of the beams to provide the required reinforcement according to the variable loads across the span. Single-layer strips on the sides of each end of the beams were sufficient to provide the necessary improvement to shear strength.

The site team had to work 12 hours a day, seven days a week to meet the completion date; two weeks to prepare the surface for the application, and the same amount of time to apply the full 2,650 m of fabric. 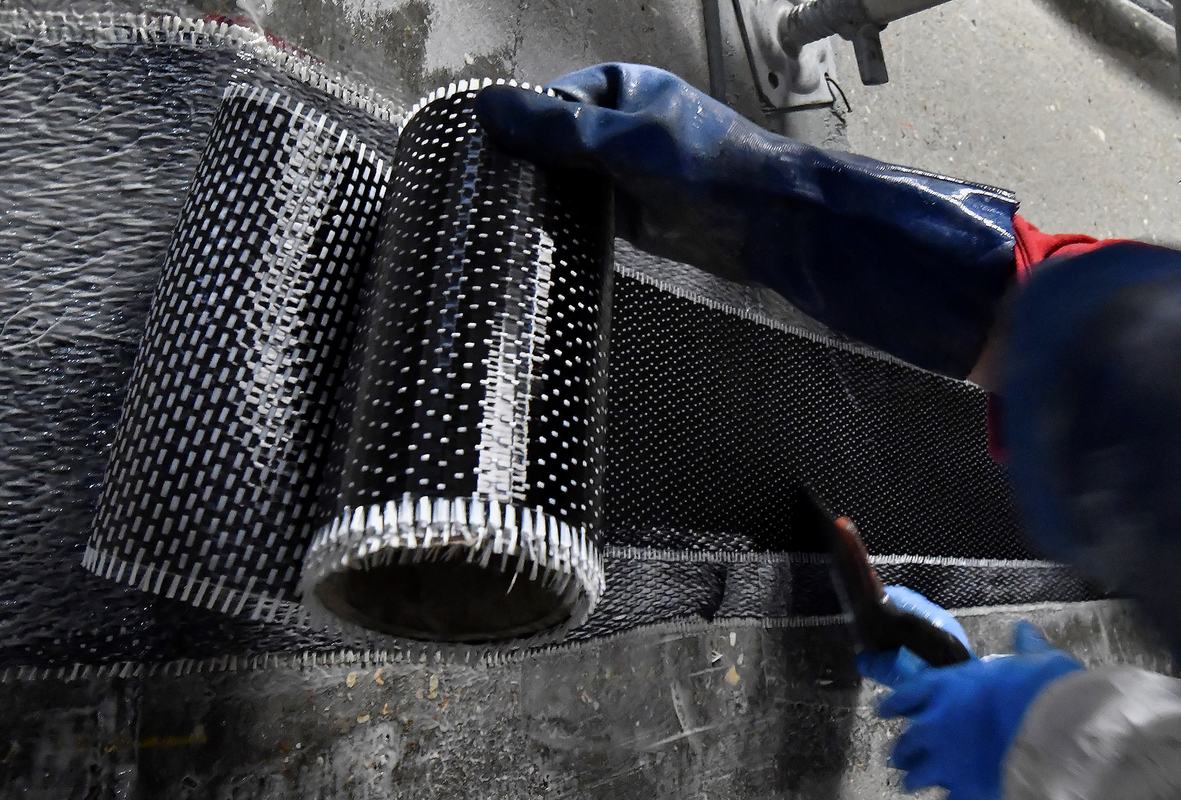 Strengthening system Foreva TFC1100 consists of externally-bonded carbon fibre-reinforced polymer that has been specially developed to offer high capacity reinforcement. It has a tensile strength greater than 1,199 MPa and linear weight of 1,100 g/m² in the longitudinal direction. Unlike conventional products, it enables a dry lay-up application in which the fabric is saturated in the resin and pressed directly against the concrete surface, eliminating any entrapped air.

The high strength of the fabric reduces the number of layers that have to be applied, and hence workmanship of the finished repair is also improved, as there is less opportunity for error.