To ensure the cable-stayed bridge lightning protection, special measures were designed to prevent lightning damage on the stay cables and improve the bridge towers’ shielding, after the risk of a strike was found to be much higher than predicted.

Freyssinet and Vinci Construction engineers were tasked with reassessing the risk of lightning strikes, and designing measures to prevent them causing any future damage to the bridge which originally opened to traffic in August 2004 and carries European Route 55 over the Gulf of Corinth.

The bridge has a cable-supported length of 2.2 km with three main spans of 560 m and a series of distinctive four-legged towers, specially designed to withstand the seismic conditions of the region. Each tower has 92 cables, up to 293 m long; the HDPE ducts of the cables incorporate steel collars to which stabilizing cross-ties can be attached if required.
During its original construction, Freyssinet’s scope of work also extended to the design and supply of a cable damping system featuring internal hydraulic dampers at deck anchorages, and pendular external dampers on the cables.

Six months after the grand opening, one of the longest cables failed after being struck by a bolt of lightning. Analysis of the incident, which occurred in January 2005, suggested that the lightning hit one of the steel collars, igniting the mastic sealant around the collar and heating the steel strands to failure.
Although the risk of the bridge being hit by lightning had been assessed in the initial design, the calculation of this risk relied on the keraunic level – a measure of the density of lightning strikes – as defined by the Greek standard. This was estimated at 30, corresponding to around three lightning flashes per year and per square kilometer – six or seven across the bridge area.
And while the towers had been protected against vertical strikes, experts considered the likelihood of horizontal strikes, which might hit the cables, to be extremely low. 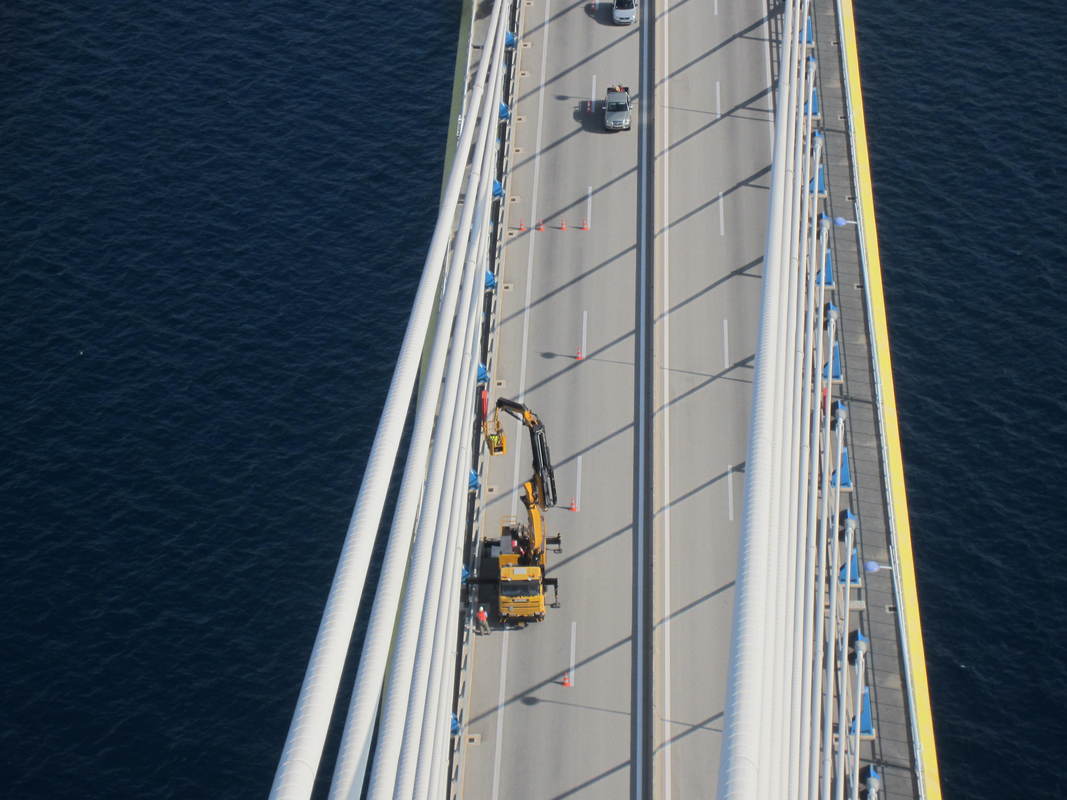 In fact detection probes installed on the towers of the bridge reported at least 21 strikes over a ten month period, revealing that the keraunic level for the exposed site was more than three times the figures in the standard.
Measures to protect the cables from damage due to lightning strikes focused firstly on replacing the flammable mastic sealant with a fireproof material that was specially developed for the purpose and had been tested under high current lightning tests. Freyssinet’s standard cable technology is proven to be resistant to the direct effects of lightning strikes.

Shielding the uppermost cables from strikes, and making the steel collars less attractive to lightning was also crucial; this involved development and installation of a group of stainless steel protection cables above the longest stays. In addition, the steel collars were earthed to electrical conductors placed inside the cable ducts.
Lightning protection of the four towers was also enhanced with additional striking rods and conductors. 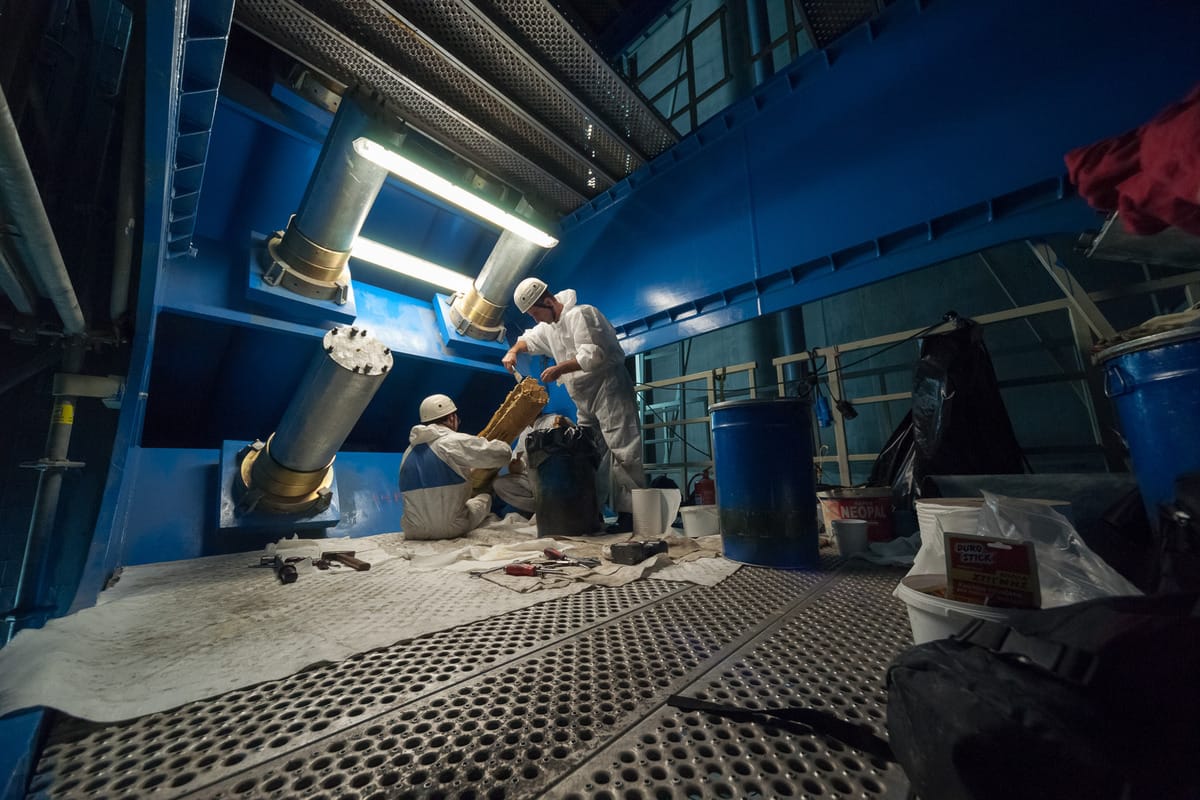 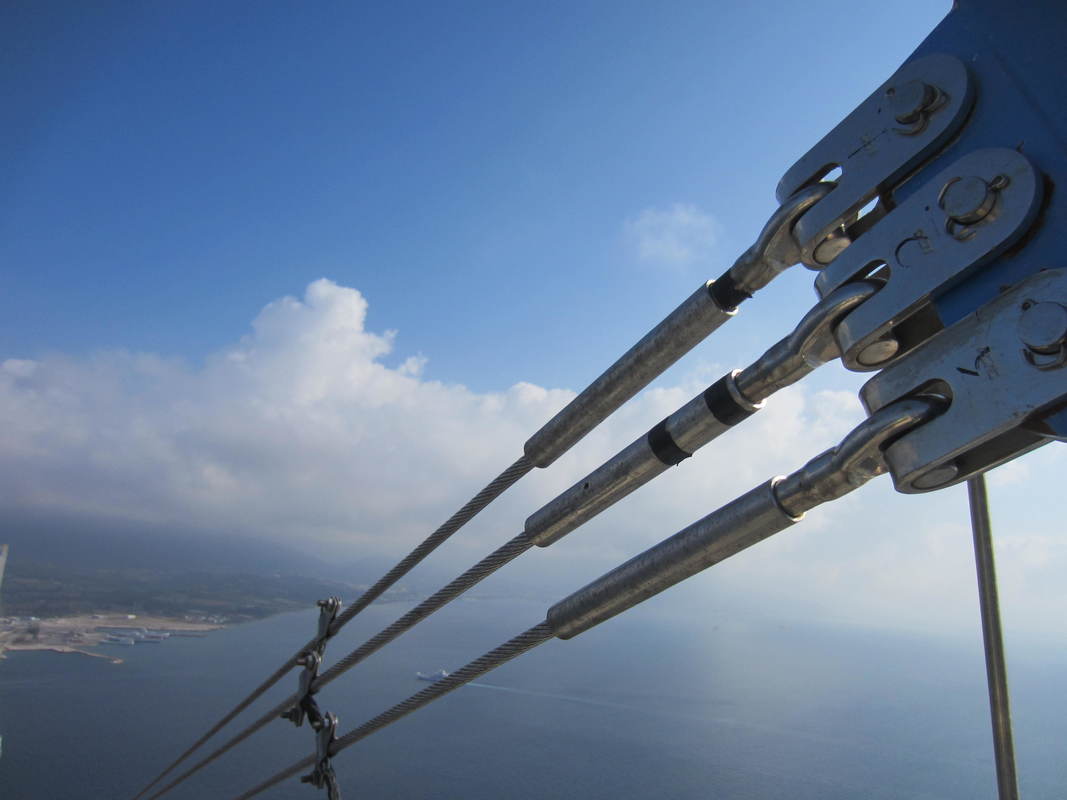 Getting the protection in place was critical; once this was done, attention could focus on improving the aerodynamics, aesthetics and performance of the system to create a fully integrated solution. On site, the upper cables were proven to be at risk of aerodynamic excitation when clamped together in a compact bundle; after further wind tunnel tests, damping spacers were incorporated to keep them apart.
Subsequent development by Freyssinet led to the creation of ‘lightning plugs’ as an improved method by which to integrate such protection into cable systems. The plugs are positioned outside the stay cable sheath and link to downward conductors installed inside them.
Although cable-stayed bridge lightning protection is not required as standard, it should be considered on bridges with particularly long cables, or those on which the designer or owner specifically requires lightning protection.

The failure of the upper stay cable could have been a huge issue for Vinci; it had the potential, through the complex contractual arrangement, to lead to the company losing the concession.
However the replacement of the stay cable and analysis of the origin of the failure; the demonstration that a lightning strike was able to have this consequence; and the proposal and implementation of the technical solution was carried out very quickly, considering the technical and scientific work that was required.