To fight its deterioration over time, a balanced cantilever box girder bridge in regional New South Wales was reinforced for additional load capacity using post-tensioning, and repaired under traffic in a complex and carefully managed procedure.
Scroll down
Scroll down

The LH Ford Bridge which carries the Mitchell Highway, over the Macquarie River in the city of Dubbo, is the only high-level river crossing in the city, making it a crucial transportation link. However, its condition had deteriorated with the drop-in span having sagged by 300 mm, and the structure experiencing excessive vibration under live loads. Among other strengthening techniques, post-tensioning played a major role. 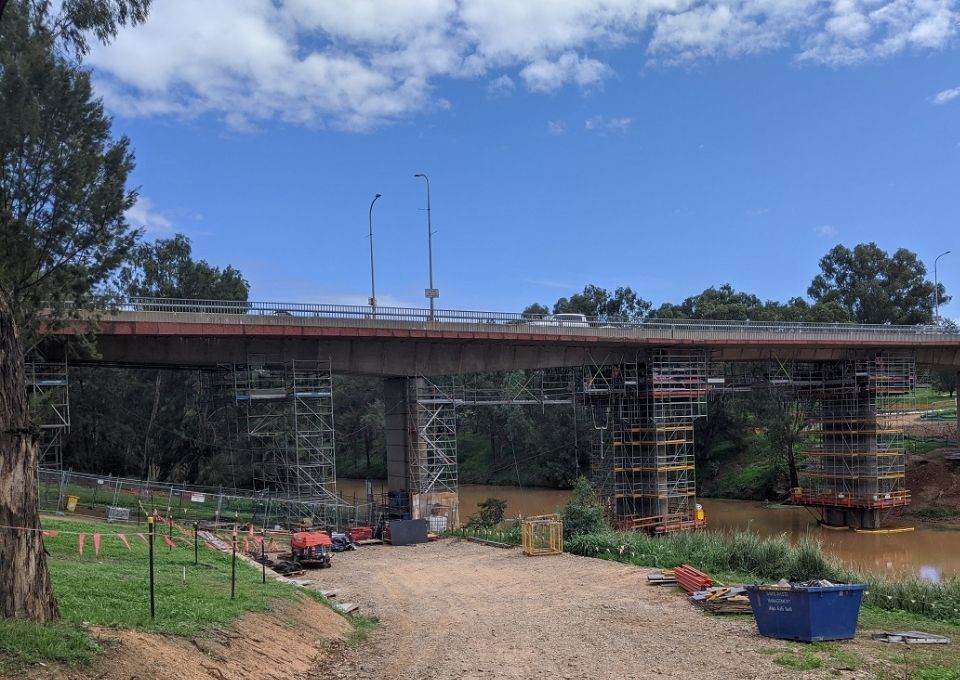 Options to repair a sagging highway bridge on a modest budget were limited, so a combined solution was selected. Two new piers were built below the main span to offer extra support, and traditional strengthening techniques were applied to the superstructure. The measures were designed to make the 50-year-old bridge fit for the remainder of its 100-year design life, allow existing weight restrictions to be lifted, and deliver additional capacity for heavier vehicles.

The LH Ford Bridge is a concrete balanced-cantilever multi-cell box girder structure, which dates from 1969 and has a 63 m-long main span incorporating a 24 m-long ‘drop-in’ span between the ends of the two cantilevers. It is one of the earliest examples of precast segmental construction in Australia.

To fight the deterioration, Freyssinet initially proposed an alternative to strengthen it solely by the application of external post-tensioning to the superstructure; a solution that can be well suited to such projects. However structural analysis revealed that the ageing bridge did not have the capacity to accommodate this kind of intervention without other measures.

Instead, two new piers had to be constructed below the halving joints of the main span with bearings installed under both the cantilevers and drop-in span, to allow some of the deflection to be recovered. The girder itself was subsequently strengthened on the main span and back spans with external post tensioning to account for the new support positions, and to boost additional load capacity. 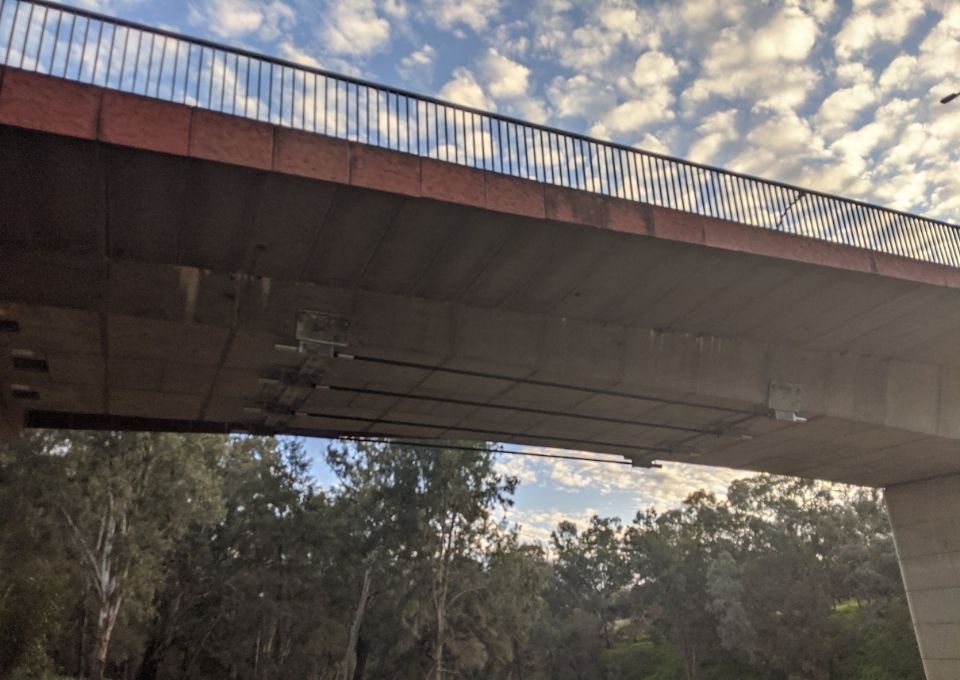 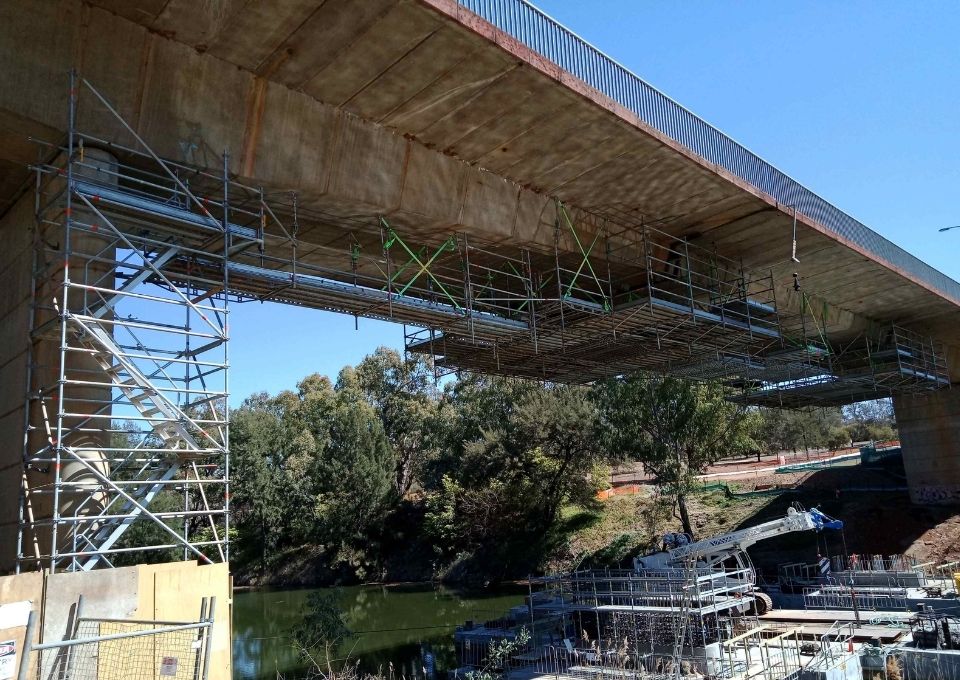 A winning feature of Freyssinet’s bid was our proposal to use suspended scaffolds to carry out the work on the bridge superstructure, rather than having to install rock platforms and temporary towers from the river bed.

But this solution brought its own challenges because of the limited capacity of the structure; all additional loads on the bridge had to be managed and controlled to prevent it being overloaded. Traffic delineators on the deck were part of this process, to prevent heavy vehicles from driving on the shoulder of the bridge, along with stringent load mapping control on the scaffold. This was particularly critical when the 0.5 t external post-tensioning brackets were lifted into place.

Getting inside the restricted space of the narrow multi-cell box was another challenge, and new access penetrations had to be created on the main span, back span and drop-in span to enable the internal works needed for bracket installation to be carried out.

Some 400, 38 mm-diameter holes were drilled into the superstructure so that brackets for the post-tensioning and the bearings could be bolted into place through the soffits and webs. No coring was permitted. Precise mapping was necessary to ensure that drilling did not damage any existing reinforcement, again to avoid any compromise of the bridge’s limited capacity.

Once these holes had been drilled, templates were produced for the external and internal components of each of the PT brackets and sent to the fabricator to ensure that the brackets would fit. Out of all of the 400 holes, only one had to be re-drilled.
New piles and piers were constructed using plant on barges on the river, and once completed, the strengthened deck was jacked up during two short, planned road closures to enable new bearings and shear keys to be installed.
By modifying the client’s original design and procedure for the bearing grouting and load transfer of the structure, Freyssinet was able to complete the work within two five-hour closures rather than the four longer shut-downs that had been initially proposed.

One of the most challenging aspects of the project was to establish the condition of the existing structure, and adapt to previously unknown circumstances that were revealed as work progressed.
It was not until the contract was under way that Freyssinet discovered the bridge had been strengthened some time ago with post-tensioning tendons backfilled into grooves cut in the deck surface. This intervention had not been recorded on as-built drawings at the time. An unexpected hazard was approximately 8t of pigeon waste that had to be removed from the inside of the box girder before any work could begin.

The contractor’s technical knowledge has been key in the innovative design solution, to maintain traffic on the bridge while it was on jacks. This was critical in maintaining position, communication and reputation on the project for Transport for NSW. The final product was delivered to a high level in what was a highly technical project.

Significant savings in programme and budget were delivered when Freyssinet proposed an innovative rehabilitation scheme as an alternative to replacing this historic city-centre bridge in Manila.
+3
Repair
UK

Tidal conditions and traffic management were the key constraints that had to be addressed by the team responsible for carrying out repairs to this critical network connection.
+2
Repair
FRANCE

When a prestressing tendon on the 3 km-long Île de Ré Bridge ruptured unexpectedly, Freyssinet’s team had to ensure that follow-up cable inspection and replacement could be done in safe conditions.
Repair
Philippines

Significant savings in programme and budget were delivered when Freyssinet proposed an innovative rehabilitation scheme as an alternative to replacing this historic city-centre bridge in Manila.
+3
Repair
UK

Tidal conditions and traffic management were the key constraints that had to be addressed by the team responsible for carrying out repairs to this critical network connection.
+2
Repair
FRANCE

When a prestressing tendon on the 3 km-long Île de Ré Bridge ruptured unexpectedly, Freyssinet’s team had to ensure that follow-up cable inspection and replacement could be done in safe conditions.